Walter Horton, better known as Big Walter Horton or Walter "Shakey" Horton, (April 6, 1917 – December 8, 1981) was an American blues harmonica player. A quiet, unassuming and essentially shy man, Horton is remembered as one of the premier harmonica players in the history of blues. Willie Dixon once called Horton "the best harmonica player I ever heard."

Born Walter Horton in Horn Lake, Mississippi, he was playing a harmonica by the time he was five years old. In his early teens, he lived in Memphis, Tennessee and claimed that his earliest recordings were done there in the late 1920s with the Memphis Jug Band, although there is no documentation of it, and some blues researchers have stated that this story was most likely fabricated by Horton. (He also claimed to have taught some harmonica to Little Walter and the original Sonny Boy Williamson, although these claims are unsubstantiated, and in the case of the older Williamson, somewhat suspect).

As with many of his peers, he spent much of his career existing on a meager income and living with constant discrimination in a segregated United States of America. In the 1930s he played with various blues performers across the Mississippi delta region. It is generally accepted that his first recordings were made in Memphis backing guitarist Little Buddy Doyle on Doyle's recordings for the Okeh and Vocalion labels in 1939. These recordings were in the acoustic duo format popularized by Sleepy John Estes with his harmonicist Hammie Nixon, among others. On these recordings, Horton's style is not yet fully realized, but there are clear hints of what is to come. He eventually stopped playing the harp for a living due to poor health, and worked mainly outside of the music industry in the 1940s. By the early 1950s, he was playing music again, and was among the first to record for Sam Phillips at Sun Records in Memphis, who would later record Elvis Presley, Carl Perkins, and Johnny Cash. The early Big Walter recordings from Sun include performances from a young Phineas Newborn, Jr. on piano, who later gained fame as a jazz pianist. His instrumental track recorded around this time, "Easy", was based on Ivory Joe Hunter's "I Almost Lost My Mind".

During the early 1950s he first appeared on the Chicago blues scene, where he frequently played with fellow Memphis and Delta musicians who had also moved north, including guitarists Eddie Taylor and Johnny Shines. When Junior Wells left the Muddy Waters band at the end of 1952, Horton replaced him for long enough to play on one session with Waters in January 1953. Horton's style had by then fully matured, and he was playing in the heavily amplified style that became one of the trademarks of the Chicago blues sound. He also made great use of techniques such as tongue-blocking. He made an outstanding single as a leader for States in 1954. Horton's solo on Jimmy Rogers' 1956 Chess recording "Walking By Myself" is considered by many to be one of the high points of his career, and of Chicago Blues of the 1950s.

Also known as "Mumbles", and "Shakey" because of his head motion while playing the harmonica, Horton was active on the Chicago blues scene during the 1960s as blues music gained popularity with white audiences. From the early 1960s onward, he recorded and appeared frequently as a sideman with Eddie Taylor, Johnny Shines, Johnny Young, Sunnyland Slim, Willie Dixon and many others. He toured extensively, usually as a backing musician, and in the 1970s he performed at blues and folk music festivals in the U.S. and Europe, frequently with Willie Dixon's Chicago Blues All-Stars. He has also appeared as a guest on recordings by blues and rock stars such as Fleetwood Mac and Johnny Winter.

In October 1968, while touring the United Kingdom, he recorded the album Southern Comfort with the former Savoy Brown and future Mighty Baby guitarist Martin Stone. In the late 1970s he toured the U.S. with Homesick James Williamson, Richard Molina, Bradley Pierce Smith and Paul Nebenzahl, and appeared on National Public Radio broadcasts. The quality of his musical output, often affected by his heavy drinking, was somewhat inconsistent over the course of his career, unpredictably wavering between brilliant and pedestrian, and much of his best work was done as a sideman. Two of the best compilation albums of his own work are Mouth-Harp Maestro and Fine Cuts. Also notable is the Big Walter Horton and Carey Bell album, released by Alligator Records in 1972.

He became a mainstay on the festival circuit, and often played at the open-air market on Chicago's Maxwell Street. In 1977, he joined Johnny Winter and Muddy Waters on Winter's album I'm Ready, and during the same period recorded some material for Blind Pig Records. Horton appeared in the Maxwell Street scene in the 1980 film The Blues Brothers, accompanying John Lee Hooker. His final recordings were made in 1980.

Horton died from heart failure in Chicago in 1981 at the age of 64 and was buried in Restvale Cemetery in Alsip, Illinois.

He was posthumously inducted into the Blues Hall of Fame in 1982.
Big Walter Horton - Harmonica Blues Kings 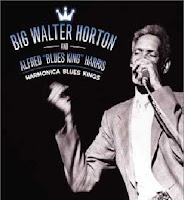