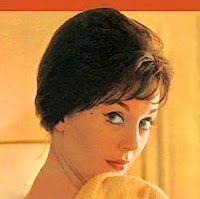 Ann Richards (October 1, 1935 - April 1, 1982) was an American jazz singer. She was born Margaret Ann Borden on October 1, 1935 in San Diego, California. Richards, who began taking singing lessons at ten and was self-taught on the piano, appeared on the West Coast music scene in 1954. She had a short stint with Charlie Barnet's band, and was later brought to the attention of Stan Kenton by songwriter Eddie Beal. Richards was with Kenton's band for a few months in 1955, and the two were married.
The admiring Kenton helped her secure a contract with Capitol Records. She was paired with conductor Brian Farnon and arranger Warren Baker for her debut album, 1958's I'm Shooting High. A duet album with Kenton, Two Much, was released in 1961. Kenton and Richards had two children, Dana and Lance, but separated in 1961. Richards created scandal when she posed for the June 1961 issue of Playboy, subsequently signing a contract with the low-end label Atco Records. The cover of her 1961 album Ann, Man! was taken from the shoot. Richards committed suicide on April 1, 1982 in Hollywood, California, dying at age 46 from a gunshot wound. 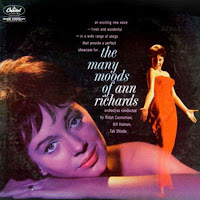 As its title promises, The Many Moods of Ann Richards captures the singer in a series of different contexts and styles--precisely the kind of project that could amount to little more than a patchwork mess in the hands of a lesser talent. But arrangers Ralph Carmichael, Bill Holman and Tak Shindo all prove sympathetic collaborators, spotlighting Richards' smoldering vocals in milieus that perfectly complement her lusty vibrato--for all their cosmetic differences, Holman's cool jazz sensibilities and Shindo's Far East exotica boast a comparably sensual atmosphere, and Richards seizes the moment with a series of assured, intelligent performances that prove her versatility and consistency. ~ Jason Ankeny, All Music Guide