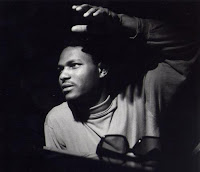 McCoy Tyner (born December 11, 1938) is a jazz pianist from Philadelphia, Pennsylvania, known for his work with the John Coltrane Quartet and a long solo career.

Tyner was born Alfred McCoy Tyner in Philadelphia as the oldest of three children. He was encouraged to study piano by his mother.

He began studying the piano at age 13 and within two years, music had become the focal point in his life. His early influences included Bud Powell, a Philadelphia neighbor.

Tyner's first main exposure came with Benny Golson, being the first pianist in Golson's and Art Farmer's legendary Jazztet (1960). After departing the Jazztet, Tyner joined Coltrane's group in 1960 during its extended run at the Jazz Gallery replacing Steve Kuhn. He appeared on the saxophonist's popular recording of "My Favorite Things" for Atlantic Records. The Coltrane Quartet, which consisted of Coltrane on tenor sax, Tyner, Jimmy Garrison on bass, and Elvin Jones on drums, toured almost non-stop between 1961 and 1965 and recorded a number of classic albums, including Live at the Village Vanguard, Ballads, Live at Birdland, Crescent, A Love Supreme, and The John Coltrane Quartet Plays.

The pianist also appeared as a sideman in many of the highly acclaimed Blue Note Records albums of the 1960s, although was often credited as 'etc.' on the cover of these albums (when listing the sidemen on the album) in order to respect his contractual obligations at Impulse Records.

Tyner is considered to be one of the most influential jazz pianists of the 20th Century, an honor he earned both with Coltrane and in his years of performing following Coltrane's death. 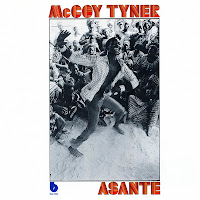 The final McCoy Tyner Blue Note album found the innovative pianist during a low point in his career. His records were not selling that well, his mentor John Coltrane had passed away three years earlier, and it was not obvious that Tyner would be able to continue struggling successfully to make a living out of music. Fortunately, his fortunes would soon rise when he signed with Milestone in 1972 and the critics began to rediscover him. Asante is a bit unusual, for the emphasis is on group interplay rather than individual solos. The four originals feature Tyner with altoist Andrew White, guitarist Ted Dunbar, bassist Buster Williams, drummer Billy Hart, Mtume on congas, and two spots for the voice of Songai. Worth investigating. 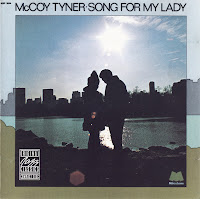 A dynamic album from Tyner – recorded with a core group that includes Sonny Fortune on reeds, Calvin Hill on bass, and Alphonze Mouzon on drums – plus additional work on some tracks by Charles Tolliver, Michael White, and Mtume! With a lineup like that, it’s hard to miss – but even so, Tyner’s still the real focus of the session – pounding up and down the keyboard with fury, really driving on the other players with his core inspiration here!
DOWNLOAD
.
.
.
.
Posted by Dippydork at 02:19