Hill is recognized as one of the most important innovators of jazz piano in the 1960s. His most-lauded work was recorded for Blue Note Records, spanning nearly a decade and a dozen albums.

Born in Chicago, Illinois (not Port-au-Prince, Haiti, as was reported by many earlier jazz reference books), Hill took up the piano at the age of thirteen, and was encouraged by Earl Hines. He was referred by jazz composer Bill Russo to Paul Hindemith, with whom he studied informally until 1952. While a teenager he performed in rhythm and blues bands and with touring jazz musicians, including Charlie Parker and Miles Davis.

Hill first recorded as a sideman in 1954, but his reputation was made by his Blue Note recordings as leader from 1963 to 1970, which featured several other important post-bop musicians including Joe Chambers, Richard Davis, Eric Dolphy, Bobby Hutcherson, Joe Henderson, Freddie Hubbard, Elvin Jones, Woody Shaw, and Tony Williams, as well as John Gilmore. Hill also played on albums by Henderson, Hutcherson, and Hank Mobley. His distinctive compositions accounted for three of the five pieces on Bobby Hutcherson's classic Dialogue album.

Hill rarely worked as a sideman after the 1960s, preferring to play his own compositions. This may have limited his public exposure. He obtained a doctorate in music from Colgate University of Hamilton and served as the university's composer in residence from 1970 to 1972. He later taught in California and was an associate professor on a tenure track at Portland State University. During his time at PSU, he established a Summer Jazz Intensive program in addition to performing, conducting workshops and attending residencies at other universities such as Wesleyan University, University of Michigan, University of Toronto, Harvard University and Bennington College. Hill returned to New York City in 1990. His final public performance was on March 29, 2007 at Trinity Church in New York City. Andrew Hill suffered from lung cancer during the last years of his life. He died at his home in Jersey City.

In May 2007, he became the first person to receive a posthumous honorary doctorate from Berklee College of Music.

As a pianist, Hill's style was marked by extreme chromaticism, complex, dense chords, flowing, legato phrasing, and frequent rubato. He would often play against the rhythmic pulse, or move into different time signatures.

His album Dusk was selected as the best album of 2001 by both Down Beat and Jazz Times; and in 2003, Hill received the Jazzpar Prize. Hill's earlier work also received renewed attention as a result of the belated release of several unissued sessions made in the 1960s for Blue Note, notably the ambitious large-group date Passing Ships.

As a consequence of his renewed prominence, a new Blue Note album titled Time Lines was released on February 21, 2006.
Andrew Hill – Andrew!!! 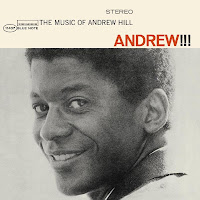 Andrew!!! finds the avant-garde composer and pianist Andrew Hill following up his landmark 1964 LP, Point Of Departure, with a more flowing quintet session, featuring the estimable vibraphonist Bobby Hutcherson and Sun Ra tenor saxophonist John Gilmore (in a rare appearance outside of the Arkestra). This is the Blue Note sound of the ’60s at its best, cutting edge yet beautifully produced with room enough for full, exploratory improvisations by all concerned. Hutcherson in particular provides a warm, fluent foil to Hill’s more abstract conceptions, and Gilmore’s bright tone and energetically structured solos bring even more fire to the mix. Andrew Hill remained somewhat underrated throughout his career, but few musicians of the time possessed his special intellectual integrity, the mark of a true composer. Andrew!!! captures him in a peak period.
DOWNLOAD
Andrew Hill – Judgment!  1964 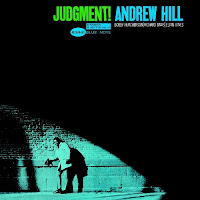 Andrew Hill’s previous 1964 outing on Blue Note, the trio-only smoke stack, had drummer Roy Haynes sounding so much like Elvin Jones that Hill brought in the real thing for next quartet session, Judgment! True to form, the always fiery Jones gets things off to an explosive start on “Siete Ocho,” with Hill and vibraphonist Bobby Hutcherson keeping up as best they can. The warmly inventive Hutcherson remained an ideal musical partner for the abstract-minded pianist-composer, which was somewhat the same role that the bluesy vibraphonist Milt Jackson played with John Lewis in the Modern Jazz Quartet–except that, as a pianist, Andrew Hill is nowhere near as restrained as the spare and sometimes decorous Lewis. The ’60s avant-gardist is a prodigious, meaty musician, taking us on a dark, chromatic journey in all his extended improvisations. Judgment! is like an MJQ session opened up for a musically (and politically) radicalized ’60s.
DOWNLOAD
Andrew Hill – Lift Every Voice  1970 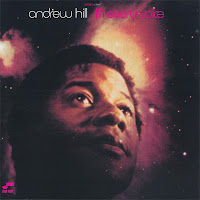 A rare and beautiful Andrew Hill session, and one of the classic Blue Note entries into the “jazz and voices” sound that the label pioneered with Donald Byrd and Eddie Gale. Hill leads a core jazz group that includes Woody Shaw, Carlos Garnett, Richard Davis, and Freddie Waits — and the group is backed by a vocal ensemble with a very spiritual vibe. The sound is a lot more hip than the Donald Byrd & Voices albums, and the playing of the core jazz group is very very soulful — along the lines of Hill’s Grass Roots album, which was also from the same period. The record’s similar to the Max Roach/Billy Harper vocal work around the same time, and titles include “Ghetto Lights”, “Hey Hey”, “Two Lullabies”, and “Love Chant”. A very unique album for Andrew Hill!
DOWNLOAD
Posted by Dippydork at 03:05