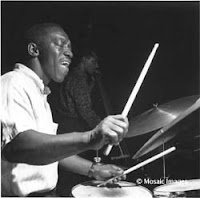 Arthur "Art" Blakey (October 11, 1919 – October 16, 1990), known later as Abdullah Ibn Buhaina, was an American Grammy Award-winning jazz drummer and bandleader. He was a member of the Ahmadiyya Muslim Community.

Along with Kenny Clarke and Max Roach, he was one of the inventors of the modern bebop style of drumming. He is known as a powerful musician and a vital groover; his brand of bluesy, funky hard bop was and continues to be profoundly influential on mainstream jazz. For more than 30 years his band, Art Blakey and the Jazz Messengers included many young musicians who went on to become prominent names in jazz. The band's legacy is thus not only known for the often exceptionally fine music it produced, but as a proving ground for several generations of jazz musicians; Blakey's groups are matched only by those of Miles Davis in this regard.

Blakey was born in Pittsburgh, Pennsylvania. By the time he was a teenager, he was playing the piano full-time, leading a commercial band. Shortly afterwards, he taught himself to play the drums in the aggressive swing style of Chick Webb, Sid Catlett and Ray Bauduc. He joined Mary Lou Williams as a drummer for an engagement in New York in autumn 1942. He then toured with the Fletcher Henderson Orchestra (1939–1942). During his years with Billy Eckstine’s big band (1944–7), Blakey became associated with the modern-jazz movement, along with his fellow band members Miles Davis, Dexter Gordon, Fats Navarro and others.

Blakey went on to record dozens of albums with a constantly changing group of Jazz Messengers — he had a policy of encouraging young musicians: as he remarked on-mic on A Night at Birdland (1954): "I'm gonna stay with the youngsters. When these get too old I'll get some younger ones. Keeps the mind active." After weathering the fusion era in the 1970s with some difficulty (recordings from this period are less plentiful and include attempts to incorporate instruments like electric piano), Blakey's band got revitalized in the early 1980s with the advent of neotraditionalist jazz. Wynton Marsalis was for a time the band's trumpeter and musical director, and even after Marsalis's departure Blakey's band continued as a proving ground for many "Young Lions" like Terence Blanchard, Donald Harrison and Kenny Garrett. Blakey continued performing and touring with the group into the late 1980s; Ron Wynn notes that Blakey had "played with such force and fury that he eventually lost much of his hearing, and at the end of his life, often played strictly by instinct." Blakey died in 1990 in New York City, leaving behind a vast legacy and approach to jazz which is still the model for countless hard-bop players.
Art Blakey And The Jazz Messengers – Soul Finger  1965 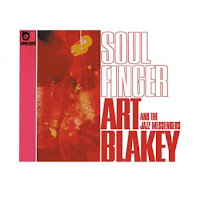 Along with Gene Krupa and Max Roach, one of the most popular and influential jazz drummers ever is the late Art Blakey. Blakey wasn’t only a powerful drummer and hard-bop standard-bearer–his many editions of the Jazz Messengers were a finishing school for a few generations of players (including Freddie Hubbard and Chuck Mangione). Originally issued in 1965, Soul Finger finds the Messengers in transition. Lee Morgan and Freddie Hubbard make farewell appearances here, and the fine, underrated saxophonist Lucky Thompson gets a guest shot. Then up-and-comer Gary Bartz is on alto; the super-fine inside-outside pianist is John Hicks. While not exactly a mellow affair, Soul Finger is a bit more relaxed, less furious, than usual.
DOWNLOAD
Art Blakey’s Jazz Messengers With Thelonious Monk  1958 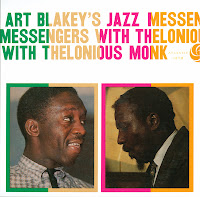 Released in 1958 on Atlantic Records, It is a collaboration between the Jazz Messengers led by Art Blakey and Thelonious Monk, and is the only time Monk recorded for the Atlantic label, Blakey’s only other appearance being as a sideman for Milt Jackson on his Plenty Plenty Soul album.
DOWNLOAD
Art Blakey & The Jazz Messengers – Caravan 1962 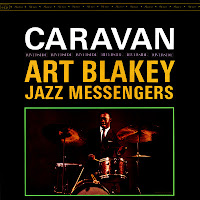 Yet another fabulous session by Art Blakey and his Jazz Messengers from the early ’60s. Caravan was the Messengers’ debut for Riverside during a time when they primarily recorded sessions for Alfred Lion’s Blue Note label. This is the sextet version of the group, with Freddie Hubbard, Curtis Fuller, and Wayne Shorter forming one of the best front lines of all time. As usual, the band is the epitome of classic hard bop, with tight ensemble work, highly advanced arrangements, and powerful solos by all.

The group’s impressive arrangement of Duke Ellington’s “Caravan” opens the set with signature African drum grooves and solos from the leader. Music director Shorter contributes two original selections for the set; his swinging waltz “Sweet ‘N’ Sour” is offered in two takes, and the moving “This is For Albert” is, interestingly enough, a dedication to pianist Bud Powell. One of the group’s strengths, of course, was their treatment of standards, and both “In the Wee Small Hours of the Morning” and “Skylark” receive beautiful readings here. Freddie Hubbard’s classic “Thermo” gets two excellent takes to close the set in true Messengers fashion.
DOWNLOAD
Art Blakey – Orgy in Rhythm Vol.1 and 2  1957 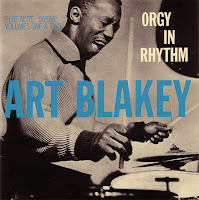 Long, hypnotic grooves, wailing chants and grounding bass tones support extended solos by Blakey, Arthur Taylor, Jo Jones and percussionist Sabu. While billed as Blakey’s record, it was certainly a collective effort that brought his rhythmic collages to life. The difficulty in recording such a large ensemble of percussion instruments fell to legendary engineer Rudy Van Gelder, who did a commendable job here; the enormity of the sound must be heard to be believed. Highlight tracks include the wailing “Buhaina Chant,” the expressive “Elephant Walk” and the stunning drum set feature “Split Skins.”
DOWNLOAD
Posted by Dippydork at 11:27