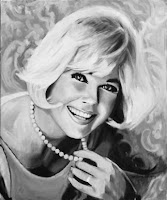 Doris Day (born Doris Mary Ann Kappelhoff; April 3, 1924) is an American actress and singer, and an animal rights activist since her retirement from show business. Her entertainment career began in the 1940s as a big band singer. In 1945 she had her first hit recording, "Sentimental Journey". In 1948, she appeared in her first film, Romance on the High Seas. During her entertainment career, she appeared in 39 films, recorded more than 650 songs, received an Academy Award nomination, won a Golden Globe and a Grammy Award, and, in 1989, received the Cecil B. DeMille Award for lifetime achievement in motion pictures.

As of 2009, Day was the top-ranking female box office star of all time and ranked sixth among the top ten box office performers (male and female).

Doris Day was born in the Cincinnati neighborhood of Evanston to Alma Sophia Welz (a housewife) and William Kappelhoff (a music teacher and choir master). All of her grandparents were German immigrants. Although the 1930 census lists her at age 7, she has stated to her biographer in Doris Day: Her Own Story and on her official website that she was born in 1924. Specifically she states, "I was named by my mother in honor of her favorite actress, Doris Kenyon, a silent screen star of that year 1924." Pianist Jim Martinez, who organized her 87th birthday party in her hometown of Carmel-by-the-Sea, California, at Day's hotel, the Cypress Inn, states that according to Doris Day's current assistant, when Day was a teenager, she added two years to her age so she would be old enough to sing with big bands. The youngest of three children, she had two brothers: Richard, who died before she was born, and Paul, a few years older.

Her parents' marriage failed owing to her father's reported infidelity. Although the family was Roman Catholic, her parents divorced. After her second marriage, Day herself would become a Christian Scientist. She has been married four times. Day developed an early interest in dance, and in the mid-1930s formed a dance duo with Jerry Doherty that performed locally in Cincinnati. A car accident on October 13, 1937, damaged her legs and curtailed her prospects as a professional dancer. While recovering, Day took singing lessons, and at 17 she began performing locally

It was while working for local bandleader Barney Rapp in 1939 or 1940 that she adopted the stage name "Day" as an alternative to "Kappelhoff," at his suggestion. Rapp felt her surname was too long for marquees. The first song she had performed for him was "Day After Day", and her stage name was taken from that. After working with Rapp, Day worked with a number of other bandleaders including Jimmy James, Bob Crosby, and Les Brown. It was while working with Brown that Day scored her first hit recording, "Sentimental Journey", which was released in early 1945. It soon became an anthem of the desire of World War II demobilizing troops to return home. This song is still associated with Day, and was rerecorded by her on several occasions, as well as being included in her 1971 television special.

Day's last major hit single came in the UK in 1964 with "Move Over, Darling", co-written by her son specifically for her. The recording was a notable departure for Day, with its distinctly contemporary-sounding arrangement. In 1967, Day recorded her last album, The Love Album, essentially concluding her recording career, though this album was not released until 1994. 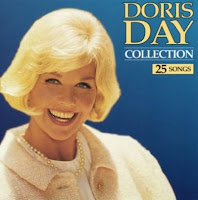