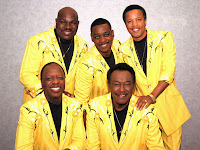 The Spinners is a soul music vocal group, active under that name since 1961, and popular with a long run of pop and R&B hits during the 1970s. The group, originating from Detroit, still tours regularly as of 2010.The band is also listed occasionally as The Motown Spinners, or (after they left the Motown label) as Detroit Spinners. These group monikers were used in the UK to avoid confusion with a British group also called The Spinners.In 1954, a group of friends who grew up together in Royal Oak Township, Michigan, just outside Detroit, came together to make music. For a time, several of the band members resided in Detroit's Herman Gardens public housing projects. Billy Henderson, Henry Fambrough, Pervis Jackson, C. P. Spencer, and James Edwards called themselves The Domingoes, however James Edwards lasted only a few weeks. He was replaced by Bobbie Smith, who sang lead on most of the Spinners' early records (and many of their biggest Atlantic hits). C. P. Spencer left the group shortly afterwards, and would later go on to be a member of the Voice Masters and The Originals. He was replaced by George Dixon. The group renamed themselves The Spinners in 1961. This name was chosen after looking at popular car hubcaps and noting how they spun around on a car's wheel.After their chart career ended, The Spinners continued touring for decades. Even though their last hits were almost 25 years ago, the bright lights of their 1972–1976 run of the charts continues to provide for the current members. They are big draws on the oldies and nostalgia concert circuits and continue to play the music that made them famous.In their boxed set, The Chrome Collection, The Spinners were lauded by David Bowie and Elvis Costello. The Spinners were inducted into The Vocal Group Hall of Fame in 1999. On July 27, 2006, The Spinners performed on The Late Show With David Letterman.A voice from their past, G.C. Cameron, would rejoin the group as lead vocalist from 2000 to 2002 (replacing Jonathan Edwards, who left due to a stroke that left him wheelchair-bound), but he left them in 2003 to join The Temptations. Frank Washington, formerly of The Futures and The Delfonics, joined for a few years, before being replaced by Charlton Washington (no relation).In 2004, original member Billy Henderson was dismissed from the group after suing the group's corporation and business manager to obtain financial records. He was replaced by Harold "Spike" Bonhart. Henderson died due to complications from diabetes on February 2, 2007 at the age of 67. (Early member C.P. Spencer had already died from a heart attack on October 20, 2004.)The group lost another member from their starting days when Pervis Jackson, who was still touring as a member of the group, died of cancer on August 18, 2008. The group continued for a short time as a quartet before Jessie Robert Peck (born in Queens, New York, December 17, 1968) was recruited as the group's new bass vocalist in February 2009. In the Summer of 2009, Harold "Spike Deleon" Bonhart left the Spinners, and was replaced by vocalist Marvin Taylor.The group is actively touring with two of its surviving original members (Fambrough and Smith), Charlton Washington, Jessie Peck, and Marvin Taylor.The Spinners were put into the limelight again in 2003 when an Elton John track was re-issued featuring them on backing vocals. In 1977, The Spinners had recorded two versions of Are You Ready For Love at the Philadelphia Studios. One had all of the Spinners, the other with only lead singer Phillipe Wynne on backing vocals. Elton John wasn't happy with the mixes and sat on the tapes for a year before asking for them to be re-mixed to give them an easier on the ear sound. Finally in 1979 the Phillipe Wynne version was released as a single but it only made it to number 42 in the UK.The track was then remixed by Ashley Beedle from Xpress-2 in 2003 after becoming a fixture in the Balearic nightclubs and being used by Sky Sports for an advertisement. It then went to number 1 in the singles chart after being released on DJ Fatboy Slim's Southern Fried record label.

A One Of A Kind Love Affair (The Anthology) - The Spinners 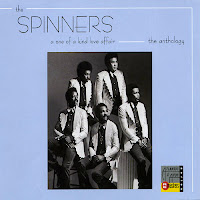 Email ThisBlogThis!Share to TwitterShare to FacebookShare to Pinterest
Labels: The Spinners