Rachelle Ferrell (born in 1961, Berwyn, Pennsylvania) is an American singer and musician. Although she has had some success in the mainstream R&B, pop, gospel, and classical music scene, she is most noted for her talents as a contemporary jazz singer.
Rachelle Ferrell began singing at the age of six, which many speculate contributed to the "development of her startling six and change octave range." Her range also includes the ability to sing in the whistle register, as stated in an editorial review in which she references her highest notes in "It only took a minute" as "Minnie Riperton-like wailing". She received classical training in violin at an early age and by the time she was a teen, she was able to play the piano at a professional level. She enrolled in Berklee College of Music in Boston where she honed her musical abilities in arrangement, singing and songwriting.

From 1975-90, Ferrell sang backup for Lou Rawls, Patti LaBelle, Vanessa Williams, and George Duke. Ferrell's debut, First Instrument, was released in 1990 in Japan, five years prior to its US release. Recorded with bassist Tyrone Brown, pianist Eddie Green and drummer Doug Nally, an all-star cast of accompanists also leave their mark on her record. They include trumpeter Terence Blanchard, pianists Gil Goldstein and Michel Petrucciani, bassists Kenny Davis and Stanley Clarke, tenor saxophonist Wayne Shorter and keyboardist Pete Levin. Her unique take on now-standards like Sam Cooke's "You Send Me", Cole Porter's "What Is This Thing Called Love", and Rodgers & Hart's "My Funny Valentine", captured the hearts and souls of the Japanese jazz buying public. 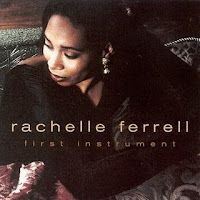