Warren Vaché (born February 21, 1951) is a jazz trumpeter, cornetist and flugelhornist born in Rahway, New Jersey. He came from a musical family as his father was a bassist. In 1976 he released his first album. He has often worked with Scott Hamilton and has some popularity among swing audiences.

Throughout high school and at Montclair State College, Vaché eagerly sought out all kinds of gigs, playing with the high school dance band, as well as at Polish weddings, bar mitzvahs, and receptions.

As a college music major, he began to find the formal training stultifying and through his father met trumpeter Pee Wee Erwin, who had been a star performer with the best bands of the swing era, including Benny Goodman's and Tommy Dorsey's.

In the mid-seventies Vaché began playing with the Benny Goodman band on the recommendation of veteran guitarist Bucky Pizzarelli and found himself in the company of such stellar players as pianist Hank Jones, trombonist Urbie Green, tenor saxophonist Zoot Sims, bassist Slam Stewart, and Goodman himself. Goodman picked and chose his appearances sparingly, and while this association took Vaché all over the world, it him afforded time to play in a variety of other settings. He became a regular part of the house band at Condon's in New York, teaming with the great veteran trombonist Vic Dickenson, whom he credits with some of his maturing approach to jazz playing. On this job he also worked next door to the influential trumpeter Roy "Little Jazz" Eldridge, who took him under his wing. "It used to amaze me how approachable my heroes were," Vaché admits, "how eager they were to pass along advice." During this time Vaché also headed a trio at New York's Crawdaddy, featuring pianist John Bunch and bassist Phil Flanigan. 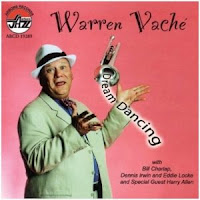