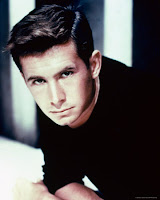 Anthony Perkins (April 4, 1932 – September 12, 1992) was an American actor, best known for his Oscar-nominated role in Friendly Persuasion (1956) and as Norman Bates in Alfred Hitchcock's Psycho (1960) and its three sequels.

Perkins was born in New York City, the son of Janet Esselstyn (née Rane), and stage and film actor James Ripley Osgood Perkins. He is a descendant of a Mayflower passenger, John Howland. He attended The Brooks School, The Browne & Nichols School, Columbia University and Rollins College, having moved to Boston in 1942, five years after his father's death.

He once said he felt too nervous around women, and resisted actresses Jane Fonda and Brigitte Bardot, who had tried to seduce him during his youth. He was a very shy actor, especially in women's company. He reportedly had affairs with actors Rock Hudson and Tab Hunter, dancer Rudolf Nureyev, composer/lyricist Stephen Sondheim and dancer-choreographer Grover Dale prior to marrying Berenson. He had his first intimate heterosexual experience at the age of 39 while working on the 1971 film The Life and Times of Judge Roy Bean with an actress who also appeared in the film. According to an interview with People magazine Perkins declined to identify the actress, but "other sources" have identified her as Victoria Principal.


Perkins died on September 12, 1992, from complications of AIDS. He was cremated, and his ashes were given to his family. His widow, Berry Berenson, was killed on American Airlines Flight 11 during the September 11 terrorist attacks in 2001. 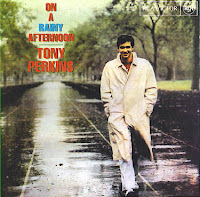 "This was the third, and last, album recorded by actor Anthony Perkins. There was an effort in the late 1950s to turn him into a recording star, which was largely unsuccessful, although he did have a Top 30 hit with "Moonlight Swim". While Tony's singles were typical "teen pop" songs of the era, his albums were more "adult pop". I guess record companies at the time thought "kids buy singles, adults buy albums" (which was more or less true). This particular album by Tony has a "jazzier" feel to it than his other albums.
DOWNLOAD