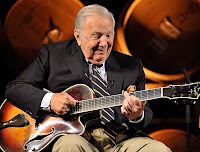 John Paul "Bucky" Pizzarelli (born January 9, 1926) is an American Jazz guitarist and banjoist, and the father of jazz guitarist John Pizzarelli and upright bassist Martin Pizzarelli. Pizzarelli has also worked for NBC as a staffman for Dick Cavett (1971) and also ABC with Bobby Rosengarden in (1952). The list of musicians Pizzarelli has collaborated with over his career includes Les Paul, Stephane Grappelli, and Benny Goodman. Pizzarelli acknowledges Django Reinhardt, Freddie Green, and George Van Eps for their influences on his style and mode of play.

Bucky Pizzarelli was born January 9, 1926 in Paterson, New Jersey, learning to play the guitar and banjo at a young age. His uncles (Pete and Bobby Domenick) were professional musicians, and sometimes the extended family would gather at one of their homes with their guitars for jam sessions. Pizzarelli cites Joe Mooney — a blind accordion player who led a quartet that included Pizzarelli's uncle, guitarist Bobby Domenick — as a major inspiration. During high school, John was guitarist for a small band that performed classical music.

In addition to his son John, Pizzarelli's son Martin is a professional musician, a bassist who has recorded both with his father and brother. His daughter Mary is a classical guitarist who appeared on her father's third album as leader, Green Guitar Blues, as well on as other recordings. Pizzarelli has also appeared on three albums of his daughter-in-law (John's wife), Jessica Molaskey.

Today Bucky Pizzarelli resides in a home on the banks of the Saddle River in Saddle River, New Jersey with his wife Ruth. An avid amateur painter, Pizzarelli's home is filled with his own artwork.

Pizzarelli's first guitar was an archtop Gibson, an expensive instrument at the time. He plays a Benedetto Bucky Pizzarelli Signature seven-string guitar, made by Robert Benedetto, who also makes guitars for Howard Alden and Frank Vignola, among others. He learned to play the 7-string from George Van Eps. The extra string on Pizzarelli's guitar provides him with a bass line during performances.
Banu Gibson & Bucky Pizzarelli - Steppin` Out (2002) 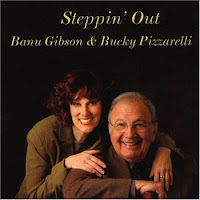