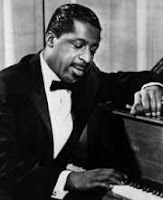 Erroll Louis Garner (June 15, 1921 – January 2, 1977) was an American jazz pianist and composer known for his swing playing and ballads. His best-known composition, the ballad "Misty", has become a jazz standard. Allmusic.com calls him "one of the most distinctive of all pianists" and a "brilliant virtuoso".

Born in Pittsburgh, Pennsylvania to an African American family in 1921 (though some sources say June 15, 1923), Erroll began playing piano at the age of 3. He attended George Westinghouse High School, as did fellow pianists Billy Strayhorn and Ahmad Jamal. Garner was self-taught and remained an "ear player" all his life – he never learned to read music. At the age of 7, Garner began appearing on radio station KDKA in Pittsburgh with a group called the Candy Kids. By the age of 11, he was playing on the Allegheny riverboats. At age 14 in 1937, he joined local saxophonist Leroy Brown.

He played locally in the shadow of his older pianist brother Linton Garner and moved to New York in 1944. He briefly worked with the bassist Slam Stewart, and though not a bebop musician per se, in 1947 played with Charlie Parker on the famous "Cool Blues" session. Although his admission to the Pittsburgh music union was initially refused because of his inability to read music, they eventually relented in 1956 and made him an honorary member. Garner is credited with having a superb memory of music. After attending a concert by the Russian classical pianist Emil Gilels, Garner returned to his apartment and was able to play a large portion of the performed music by recall.

Short in stature (5 foot 2 inches), Garner performed sitting on multiple telephone directories, except when playing in New York City, where a Manhattan phone book was sufficient. He was also known for his occasional vocalizations while playing, which can be heard on many of his recordings. He helped to bridge the gap for jazz musicians between nightclubs and the concert hall.

Until his death from lung cancer on January 2, 1977, he made many tours both at home and abroad, and produced a large volume of recorded work. Garner is buried in Pittsburgh's Homewood Cemetery. He was, reportedly, The Tonight Show host Johnny Carson's favorite jazz musician; Garner appeared on Carson's show many times over the years.

Called "one of the most distinctive of all pianists" by Allmusic.com, Garner showed that a "creative jazz musician can be very popular without watering down his music" or changing his personal style.[1] He is referred to as a "brilliant virtuoso who sounded unlike anyone else", using an "orchestral approach straight from the swing era but …open to the innovations of bop." Garner's ear and technique owed as much to practice as to a natural gift. His distinctive style could swing like no other, but some of his best recordings are ballads, such as his best-known composition, "Misty". "Misty" rapidly became a jazz standard – and was famously featured in Clint Eastwood's Play Misty for Me (1971).

His recording career started out in the late 1940s when several 7" EP records were made with tracks such as "Fine and Dandy" and "Sweet 'n' lovely". However, his 1955 album Concert by the Sea was a best-selling jazz album in its day and features Eddie Calhoun on bass and Denzil Best on drums. Ironically this recording of a performance at an army base in Carmel, California, was made using relatively primitive sound equipment, but Garner's inventiveness and swing made its point in each tune. Other notable works include 1951's Long Ago and Far Away and 1974's Magician, both of which see Garner perform a number of classic standards in his own style. Often the trio was expanded to add Latin percussion, usually a conga, with electric results.

In 1964, Garner appeared in the UK on the music series Jazz 625 (625 referring to the PAL 625-line format) broadcast on the BBC's new second channel. The programme was hosted by Steve Race, who introduced Garner's trio with Eddie Calhoun on bass and Kelly Martin on drums. While working the keyboard hard, Garner had perspiration streaming down his face as the programme made close shots of his hands.
.
.
.
.
Erroll Garner - Concert By The Sea (1955) 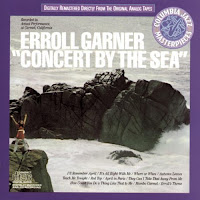 Garner's place in the history of jazz piano is unusual. He demonstrates no obvious influences of any other pianist, he appears to have influenced no-one; and yet his is such a thoroughly engaging, happy, always enjoyable style. Here, he deftly picks his way through a sprightly selection of songs. Throughout, the Elf happily indulges his love for lengthy introductions that defy listeners to identify the coming tune, yet, when he finally arrives at the song as the composer wrote it, everything seems just right. Ageless music in an impishly droll style that defies categorization; it's just Erroll's way.
.
.
DOWNLOAD
.
.
.
.
.