Eartha Mae Kitt was born (January 17, 1927 – December 25, 2008) on a cotton plantation in North, South Carolina, a small town in Orangeburg County near Columbia, South Carolina.  Kitt's mother was of Cherokee and African-American descent and her father of German or Dutch descent. Kitt was conceived by rape. She was an American actress, singer and cabaret star. She was perhaps best known for her highly distinctive singing style and her 1953 hit Christmas song "Santa Baby". Orson Welles once called her the "most exciting woman in the world." She took over the role of Catwoman for the third season of the 1960s Batman television series, replacing Julie Newmar, who was unavailable for the final season. She also was famous for being the voice of Yzma in Disney's The Emperor's New Groove as well as its sequel and TV series.


Kitt was raised by Anna Mae Riley, an African-American woman whom she believed to be her mother. Anna Mae went to live with a black man when Eartha was 8. He refused to accept Kitt because of her relatively pale complexion. Kitt lived with another family until Riley's death. She was then sent to live in New York City with Mamie Kitt, who she learned was her biological mother. She had no knowledge of her father, except that his surname was Kitt and that he was supposedly a son of the owner of the farm where she had been born. Newspaper obituaries state that her white father was "a poor cotton farmer".

Kitt began her career as a member of the Katherine Dunham Company in 1943 and remained a member of the troupe until 1948. A talented singer with a distinctive voice, she recorded the hits "Let's Do It"; "Champagne Taste"; "C'est si bon"; "Just an Old Fashioned Girl"; "Monotonous"; "Je cherche un homme"; "Love for Sale"; "I'd Rather Be Burned as a Witch"; "Uskudar'a Gideriken (aka Katibim)"; "Mink, Schmink"; "Under the Bridges of Paris"; and her most recognizable hit, "Santa Baby", which was released in 1953. Kitt's unique style was enhanced as she became fluent in the French language during her years performing in Europe. Her English-speaking performances always seemed to be enriched by a soft French feel. She spoke four languages and sang in seven, which she effortlessly demonstrated in many of the live recordings of her cabaret performances.

After romances with the cosmetics magnate Charles Revson and banking heir John Barry Ryan III, she married John William McDonald, an associate of a real estate investment company, on June 6, 1960.[15] They had one child, a daughter named Kitt, born on November 26, 1961. They divorced in 1965.

A long-time Connecticut resident, Eartha Kitt lived in a converted barn on a sprawling farm in the Merryall section of New Milford for many years and was active in local charities and causes throughout Litchfield County. Subsequently moving to Pound Ridge, New York, then in 2002, Kitt moved to the southern Fairfield County, Connecticut town of Weston to be near her daughter Kitt and family. (Kitt McDonald married Charles Lawrence Shapiro in 1987 and had two children, Jason and Rachel Shapiro.)

Ms. Kitt became a vocal advocate for homosexual rights and publicly supported same-sex marriage, which she believed to be a civil right. She had been quoted as saying, "I support it [gay marriage] because we're asking for the same thing. If I have a partner and something happens to me, I want that partner to enjoy the benefits of what we have reaped together. It's a civil-rights thing, isn't it?"

Kitt died from colon cancer on Christmas Day, 2008 at her Weston, Connecticut, home. 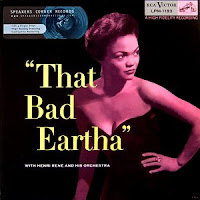