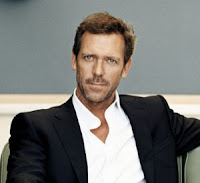 James Hugh Calum Laurie, OBE (born 11 June 1959) better known as Hugh Laurie, is an English actor, voice artist, comedian, writer, musician, recording artist, and director. He first became well known in the media as one half of the Fry and Laurie double act, along with his friend and comedy partner Stephen Fry, whom he joined in the cast of Blackadder and Jeeves and Wooster from 1987 until 1999. Since 2004, he has played the lead as Dr Gregory House, the protagonist of House, for which he received two Golden Globe awards, two Screen Actors Guild awards and several Emmy nominations.As of August 2010, Laurie is the highest paid actor in a drama series on US television. His debut album, Let Them Talk, was released in May 2011.Laurie was born in Oxford, England. The youngest of four children, Laurie has an older brother named Charles and two older sisters named Susan and Janet. He had a somewhat strained relationship with his mother, Patricia (née Laidlaw). His father, Ran Laurie, was a medical doctor who also won an Olympic gold medal in the coxless pairs (rowing) at the 1948 London Games.Although Laurie was raised in the Presbyterian church as a child, he has declared: "I don't believe in God, but I have this idea that if there were a God, or destiny of some kind looking down on us, that if he saw you taking anything for granted he'd take it away."He was brought up in Oxford and attended the Dragon School. He later went on to Eton and then to Selwyn College, Cambridge, where he studied for a degree in archaeology and social anthropology. While at Cambridge he was a member of Footlights, the university dramatic club that has produced many well known actors and comedians, and he was club president in 1981. He was also a member of the Hermes Club and the Hawks' Club.Like his father, Laurie was an oarsman at school and university; in 1977, he was a member of the junior coxed pair that won the British national title before representing Britain's Youth Team at the 1977 Junior World Rowing Championships. In 1980, Laurie and his rowing partner, J. S. Palmer, were runners-up in the Silver Goblets coxless pairs for Eton Vikings rowing club. Later, he also achieved a Blue while taking part in the 1980 Oxford and Cambridge Boat Race. Cambridge lost that year by 5 feet. Laurie is a member of Leander Club, one of the oldest rowing clubs in the world.Forced to abandon rowing during a bout of glandular fever (mononucleosis), he joined the Cambridge Footlights, which has been the starting point for many successful British comedians. There he met Emma Thompson, with whom he had a romantic relationship; the two remain good friends. She introduced him to his future comedy partner, Stephen Fry. Laurie, Fry and Thompson later parodied themselves as the University Challenge representatives of "Footlights College, Oxbridge" in "Bambi", an episode of The Young Ones, with the series' co-writer Ben Elton completing their team. In 1980–81, his final year at university, besides rowing, Laurie was also president of the Footlights, with Thompson as vice-president. They took their annual revue, The Cellar Tapes, to the Edinburgh Festival Fringe and won the first Perrier Comedy Award. The revue was written principally by Laurie and Fry, and the cast also included Thompson, Tony Slattery, Paul Shearer and Penny Dwyer. 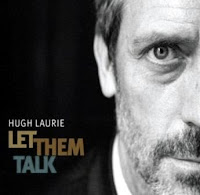