Marian Turner was a musical prodigy from the time she could sit at the piano, about the age of three. She studied classical music and the violin, in addition to the piano.

She pursued classical studies at the Guildhall School of Music and Drama in London. Much to the dismay of her family, she developed a love for American jazz and musicians such as Duke Ellington, Fats Waller, Teddy Wilson, Mary Lou Williams, and many others. In 1938, despite her family's efforts to keep her at Guildhall, Marian left to join Billy Mayerl's Claviers, a four-piano vaudeville act, performing under the stage name of Marian Page. The group toured throughout Europe during World War II, entertaining Allied troops.

While touring with USO shows in Belgium, she met and began performing with Chicago cornetist Jimmy Mc Partland in 1944. The couple soon married, playing at their own military base wedding in Germany.

After the war, they moved to Chicago to be near Jimmy's family. Then, in 1949, the Mc Partlands settled in Manhattan, living in an apartment in the same building as the Nordstrom Sisters. With Jimmy's help and encouragement, Marian started her own trio which enjoyed a long residency at a New York City jazz club, the Hickory House, during 1952-1960. The drummer Joe Morello was a member of the group until he departed to join Dave Brubeck's Quartet. She also played at The Embers.

In the 1953-1954 season, Mc Partland appeared as a regular on NBC's Judge for Yourself quiz program emceed by Fred Allen, with Dennis James as the announcer.

After many years of recording for labels such as Capitol, Savoy, Argo, Sesac, Time, and Dot, in 1969 she founded her own record label, Halcyon Records, before having a long association with the Concord Jazz label.

Marian was awarded a Grammy in 2004, a Trustees' Lifetime Achievement Award, for her work as an educator, writer, and host of NPR Radio's long-running Marian Mc Partland's Piano Jazz. Although a master at adapting to her guest's musical styles and having a well-known affinity for beautiful and harmonically-rich ballads, she also has recorded many tunes of her own. Her compositions include "Ambiance", "There'll Be Other Times", "With You In Mind", "Twilight World", and "In the Days of Our Love".

Just before her 90th birthday, she composed and performed a symphonic piece, A Portrait of Rachel Carson to mark the centennial of the environmental pioneer.

Mc Partland's encyclopedic knowledge of jazz standards, highly musical ear, involvement in over 60 years of evolving jazz styles, and rich experience blending with radio guests has led to a musical style that has been described as: "flexible and complex, and almost impossible to pigeonhole". She is known as a harmonically and rhythmically complex and inventive improviser: "She was never content to be in one place, and always kept improving. She has great ears and great harmonics. Because of her ear, she can go into two or three different keys in a tune and shift with no problem."

She also is a synesthete, associating different musical keys with colors, stating that: "The key of D is daffodil yellow, B major is maroon, and B flat is blue".

She was appointed Officer of the Order of the British Empire (OBE) in the 2010 New Year Honours.
Marian McPartland - Plays the Music of Billy Strayhorn 1990 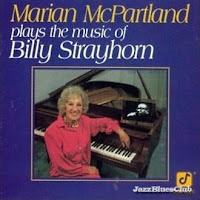 Pianist Marian McPartland has always had an affinity for the compositions of Billy Strayhorn, giving his songs the right amount of sensitivity and swing. For this quartet session with altoist Jerry Dodgion, bassist Steve LaSpina, and drummer Joey Baron, McPartland explores ten of Strayhorn's best-known originals, including "Isfahan," "Lotus Blossom," "Lush Life," "Take the 'A' Train," and "Raincheck." No revelations or innovations occur, but Billy Strayhorn's music is well served by McPartland's interpretations. ~ by Scott Yanow, All Music Guide
DOWNLOAD 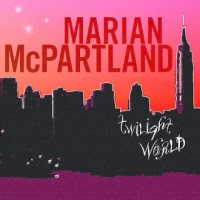 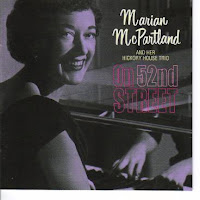 This album consists primarily of performances recorded at the Hickory House Club in October 1953, with a trio consisting of bassist Vinnie Burke and the great drummer Joe Morello, who never achieved the fame he deserved, but did make a name for himself in Dave Brubeck's group. At the end of this program are five studio recordings made earlier that same year, with Morello and bassist Bob Carter. McPartland's style is witty and elegant, and if her solos never exactly catch fire, they never settle for mere decorousness either. She plays with plenty of energy, and her inventiveness is consistently impressive. The program is unsurprising, consisting mainly of such standards as "I've Got the World on a String," "A Foggy Day," and "Willow Weep for Me," but the material never sounds tired. The sound quality is, surprisingly, quite good. Research in the Savoy archives has revealed that these recordings were produced by a then very young Rudy Van Gelder, who would later become one of the great jazz producers of the century. ~ Rick Anderson, All Music Guide